In Defense of the Aphids 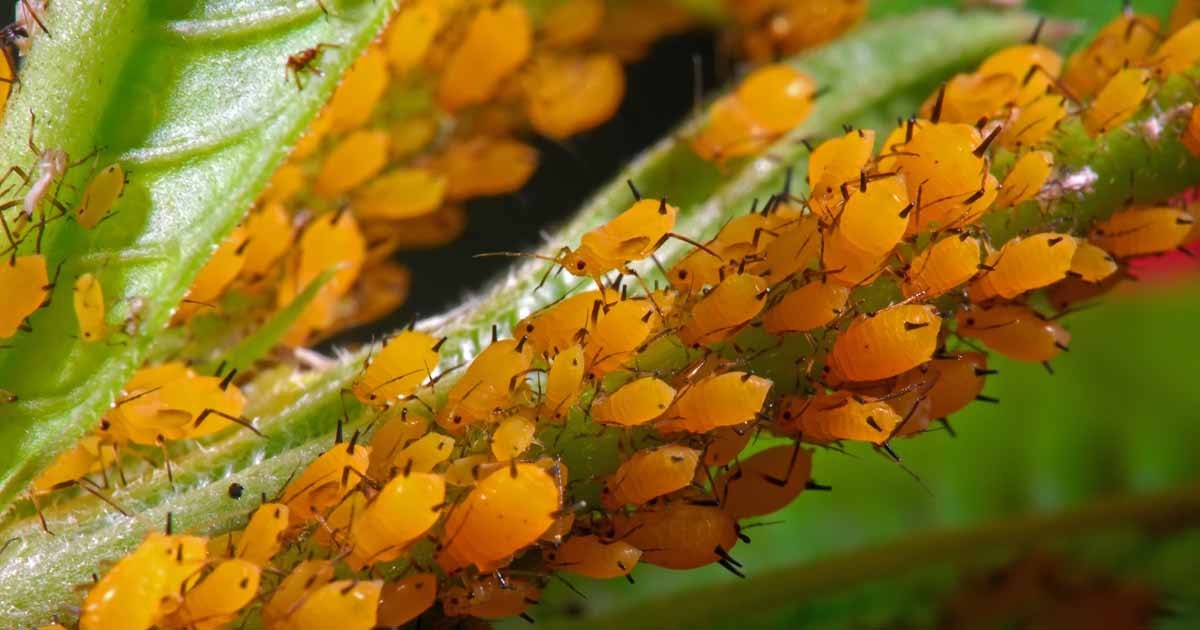 These creatures are among some of the most hated and misunderstood beings on the planet. They come to feed off the sap of your plants and suck the life giving juices from it. Their intention is to survive like any other critter on the planet. They won't kill your plants, only weaken them and make them look unsightly at the end of the season. Your plants will grow back as strong as ever next year.

Did you ever think about what purpose they have in the world? Most people don't and just go to the kill, kill, kill method. What you're doing essentially is stealing food from the very predators that will take these creatures off your plants naturally. In turn, those predators feed many of our bird species which are going extinct at an incredible rate.

Imagine your family survives off your huge garden crop each year and that is the only thing standing between you and starvation. This would be the equivalent of a neighbor killing off half of your garden because it's unsightly to them (and frankly none of their business), thereby allowing you to only feed half your family. Maybe that would hit home a little more.

Most people give up too quickly thinking that the aphids have won, while in fact the predators are just making sure there are enough to feed their young. What mother wouldn't want to make sure her babies were fed? Predators are called in by several methods. One way is through the scent of the honeydew left by the aphids on the plants. Another is the plant sending out pheromone signals which calls in your parasitic wasps and hoverflies. Nature is pretty amazing.

For instance the Convergent Ladybeetle: 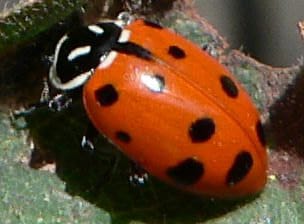 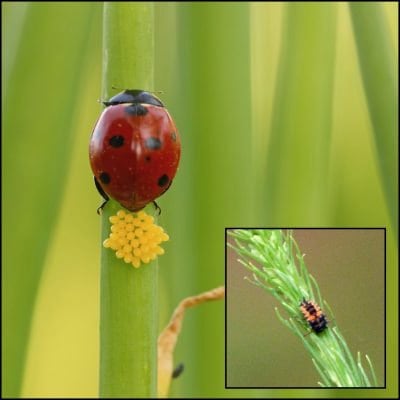 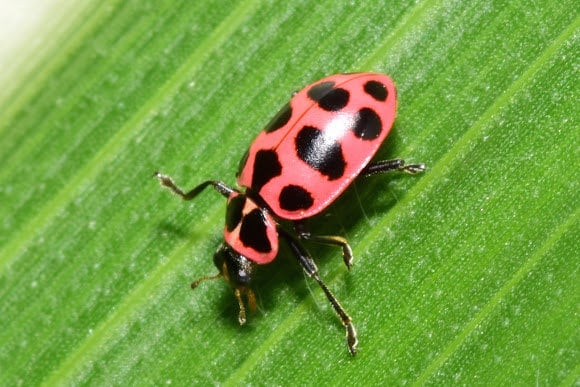 These beautiful creatures are becoming few and far between these days. Why? Well, we've let their Asian counterparts take over the country and they are plundering on the local aphids, thereby dwindling the food source for our native ladybeetles. Human intervention is also dwindling this food source every time you decide to kill aphids. These habits combined with the extreme use of neonicotinoids in 95% of the greenhouse industry spells disaster for our local beneficial insect populations.

One ladybeetle can eat up to 50 aphids per day. When they find an adequate food source (hundreds of thousands of aphids) they mate and lay their eggs upon the plants that are saturated densely with aphids. Those eggs hatch and out come the larvae to start munching away. Each larvae can eat 15-20 aphids per day.  Typically the female lays between 10 and 50 eggs.  Meaning those troops can eat up between 150 and 1000 aphids per day. Most of the time you will have many females come in and lay eggs in the same area so these numbers would multiply by the thousands. In just a few weeks these families can knock down millions of aphids without a problem. Feed the good guys. Leave the aphids. Ladybugs can live up to 3 years!

There is always the person that says "Hey, you know those yellow aphids aren't native?"  Well, you're right, but did you ever try to stop a species from going somewhere you didn't want it when it's capable of adapting and growing wings when it needs to? With our transportation methods of old and new, nobody was going to stop this from happening. The Oleander aphid was believed to be brought over by Spanish settlers while transporting Oleander plants into the United States around the mid 1500's. This species has been here for centuries and has become a main food source for the following predators mentioned in the article. With global temperatures steadily increasing, this may be the only species that survives the test of time in the United States. The bird species that survive this period will be thankful as well.

Next up is the Green Lacewing. 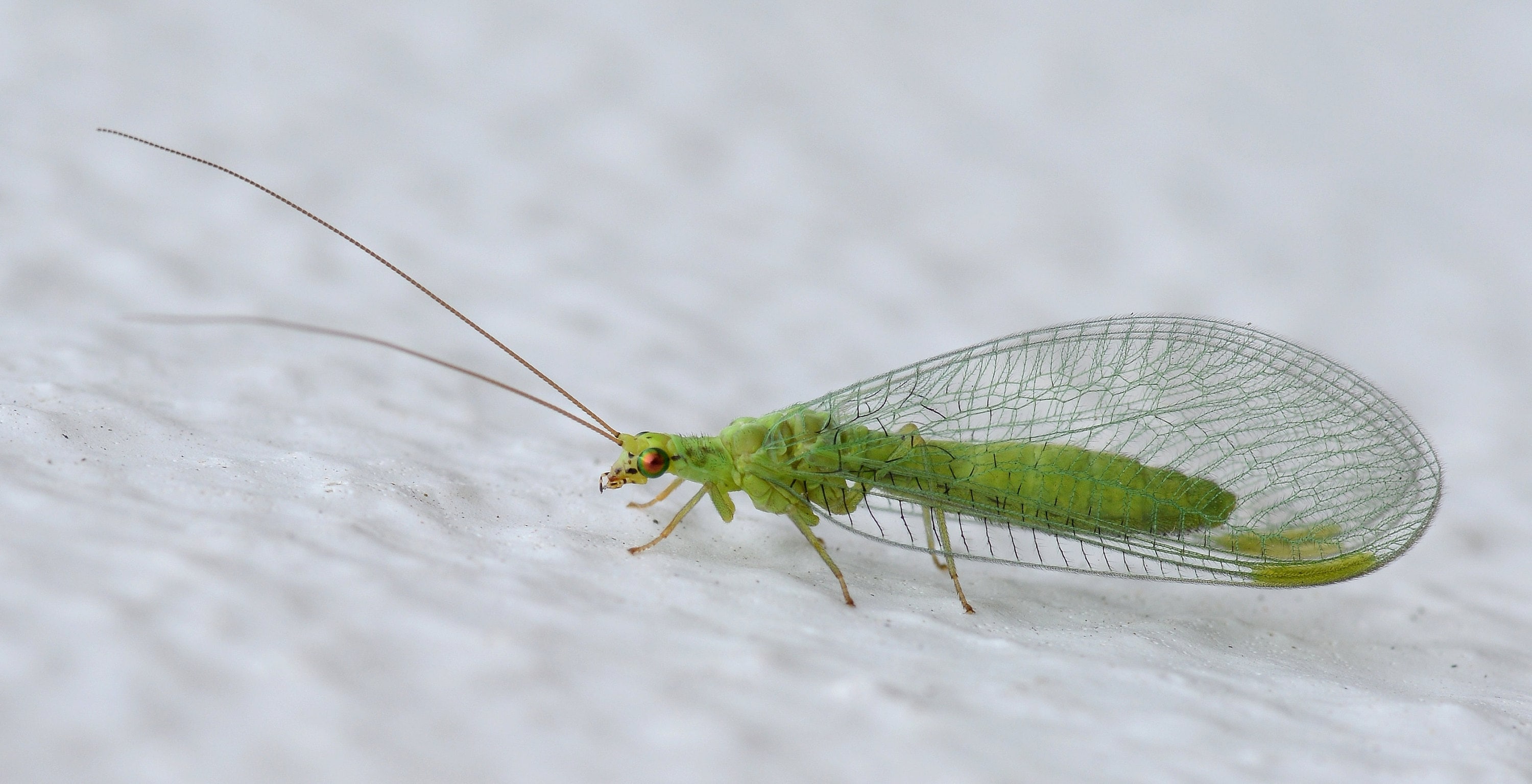 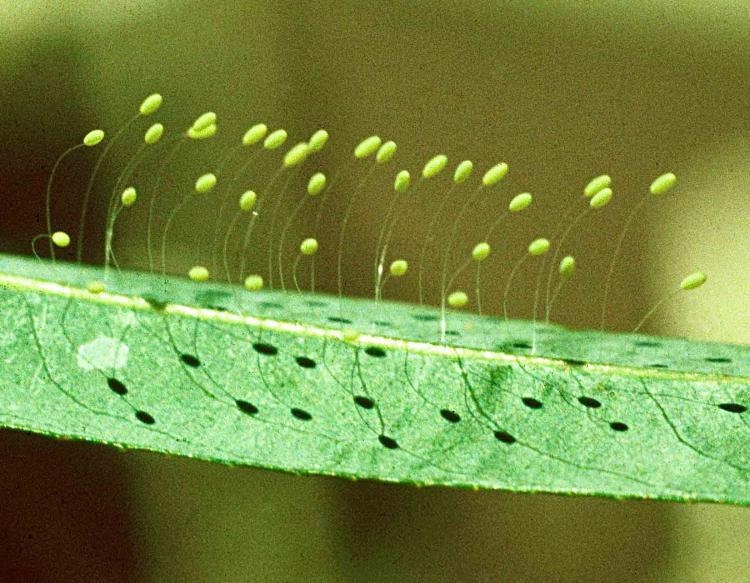 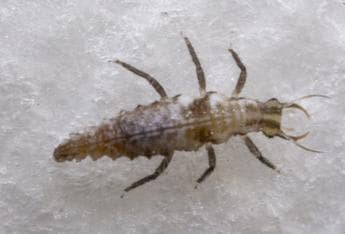 The Green Lacewing is a beautiful predator that comes in and lays eggs much like the ladybeetle only in a much different style. Each of the larvae that hatch are capable of consuming several hundred of aphids per week. An amazing creature to watch in action. They can work in action with the ladybeetles and have no problem cleaning house as a team. 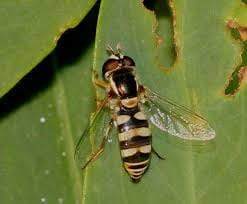 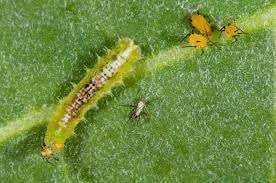 Hoverfly larvae (Syrphidae family) are another useful predator against the aphid community. Each larvae can consume up to 400 aphids in it's 3 week life cycle. That's fascinating considering their size. Syrphid flies are attracted to many nectar plants and will lay their eggs near aphid concentrations. 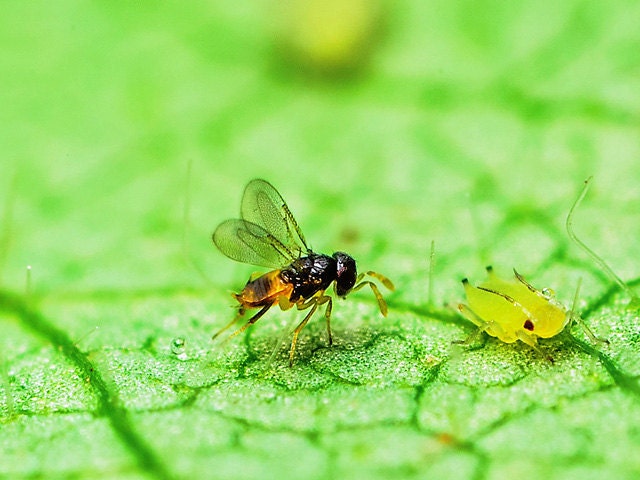 Parasitic Wasp predating on an aphid

Parasitic Wasps use the soft body of the aphids to lay their eggs in. They use the body of the aphid as a host for their birthing suite. After a short period of time the eggs begin to hatch and the hatchlings thereby kill the host as they emerge from it's body. They are often referred to as mummies. The circle of life. One meets it's fate while many newborns are brought forth. The insect world relies on the availability of plants and other insects to make their life cycle continue. Our bird populations rely on all of those insects as well. It's a chain reaction when imbalance in nature happens.

There are some other species that also feed on aphids, but this is the good majority of what you'll find on a yearly basis.

This is just a friendly reminder that just because an insect is of no real purpose in your eyes, the big picture is just out of focus.  All of these insects that work together in the ecosystem sustain the life of the entire planet. Without them, there are no humans. So before you get squish happy, think about the necessity that those insects have for other creatures.

I encourage you to watch nature and study it to grasp the understanding of how everything works together. We're essentially a new species on this planet compared to several others, so maybe we should learn to observe and learn before we try to change the outcome.

Advocate for Insects and Widlife across the globe