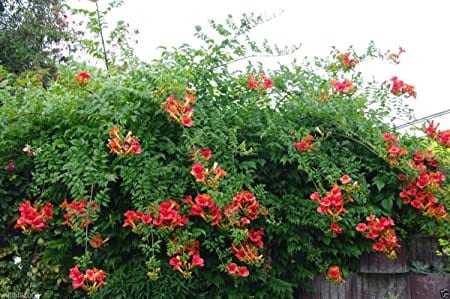 The nectar of the flowers attracts the Ruby-Throated Hummingbird, Baltimore Oriole, Orchard Oriole and some Sphinx moths; the hummingbird and sphinx moths are effective pollinators, while the orioles have a tendency to tear-up the flowers, causing more harm than good. Bumblebees and honeybees sometimes seek nectar or pollen from the flowers, but they are probably less effective pollinators. The extra-floral nectaries attract an abundance of ants and flies; to a lesser extent, Halictid bees visit the extra-floral nectaries as well. The caterpillars of Paratraea plebeja (Plebeian Sphinx) feed on the foliage, as do the adults and larvae of the leaf beetle, Octotoma plicatula. The caterpillars of Clydonopteron tecomae (Trumpet Creeper Moth) feed on the seedpods and their contents. The foliage is toxic to mammalian herbivores and little bothered by them; a small number of people may experience a rash from contact with the foliage. Because of the luxuriant leaves and rampant growth of this vine, it provides good cover and nesting habitat for many species of songbirds.

This perennial woody vine is up to 40' long, branching occasionally. Trumpet Creeper usually climbs up trees, shrubs, telephone poles, and other vertical structures using aerial rootlets, otherwise it sprawls across the ground. Young shoots are greenish brown, but become brown and woody as they mature. Pairs of opposite compound leaves occur along the length of the vine. These compound leaves are odd pinnate, consisting of about 7-11 leaflets; they are up to 2½' long and ¾' across. The central stalk of each compound leaf is often hairy. The leaflets are up to 3" long and 1" across. They are ovate or elliptic, pinnately veined, and coarsely toothed along the margins. The upper surface of each leaflet is shiny and hairless, while the lower surface often has a few hairs along the major veins.

Trumpet Creeper is an exotic-looking vine that looks like something one would expect to find in the tropics. It has large flamboyant flowers and reasonably attractive foliage, but can be very aggressive. There is very little that resembles it, especially in the central and northern areas of the state. In southern Illinois, there occurs the high climbing vine Bignonia capreolata (Cross-Vine), which resembles Trumpet Creeper somewhat and belongs in the same plant family. The Cross-Vine has trumpet-shaped orange flowers like Trumpet Creeper, except that they are a little smaller (about 2" in length). Each compound leaf of Cross-Vine has only a pair of leaflets with smooth margins and a branching tendril. A compound leaf of Trumpet Creeper, on the other hand, has 7-11 leaflets with coarsely serrate margins and no tendril. Trumpet Creeper relies on aerial rootlets to climb adjacent vegetation and objects, rather than tendrils.