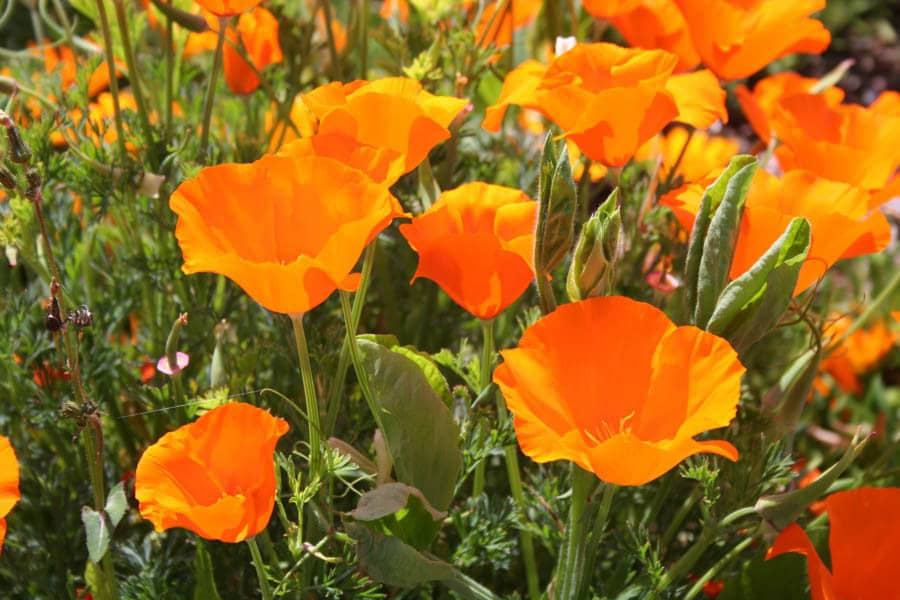 Benefits
While there is no scientific evidence that shows the efficacy of California poppy on its own, early studies suggest that when it is used in combination with other herbs and minerals, it shows promise for the management of various conditions (3).

Natural compounds and unique alkaloids found in the California poppy, namely protopine and allocryptopine, appear to interact with a variety of receptors in powerful ways.

Researchers stress that their understanding of California poppy and its biological effects at the molecular level is still lacking and that much more research is needed (4).

In a study published in the peer-reviewed journal, Current Medical Research and Opinion, 264 patients presenting with mild-to-moderate generalized anxiety were randomly assigned to two groups; one group was given a combination of Crataegus oxyacantha (hawthorn), Eschscholtzia californica (California poppy) and magnesium and the other was given a placebo. What the researchers found is that the preparation containing fixed quantities of hawthorn, California poppy and magnesium proved safe and more effective than the placebo in treating mild-to-moderate anxiety disorders (5).

This combination product, called Sympathyl, is not yet available in the US (6), but is prescribed in Europe and available on the internet.

California poppy may help promote sleep. Doses above 100 mg/kg of aqueous extract of California poppy in rats have shown to provide sedative properties, relaxation and the induction of sleep (7).

California poppy may benefit those suffering from depression. In addition to having a promising effect on anxiety, protopine and allocryptopine alkaloids were also found to block human serotonin and noradrenaline transporters and possess antidepressant-like effects on animal testing models (8).

California poppy shows early promise in cancer treatment. The peer-reviewed journal, Clinical Cancer Research, reported on the potential for the alkaloid chelerythrine as an antitumor drug against squamous cell carcinoma (9). One study demonstrated that chelerythrine exhibited cytotoxic activity against nine human tumor cell lines tested in vitro and treatment with chelerythrine in mice was associated with significant tumor growth delay. Further, treatment resulted in minimal toxicity (10). The alkaloid sanguinarine has been used to study prostate cancer cells, and initial results show that sanguinarine may be developed as part of future treatment for the management of prostate cancer (11).

Seeds were well packed and arrived on time! Good quantity for the price!

Anxious to watch them grow!

thank you for shipping these out so quickly! i've had them in the dirt for a bit now and they're germinating well <3